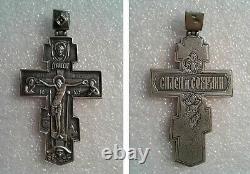 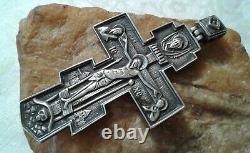 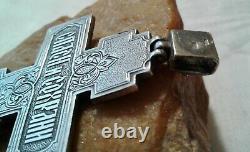 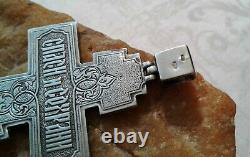 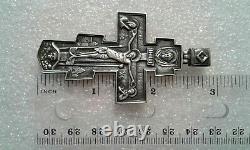 Iconic images of the Crucifixion with the Instruments of the Passion over the skull (Adam's head), and. The Holy Face of Jesus known in the Orthodox tradition as the???? " ("Savior Not Made by Human Hands icon). The Crucifix has the "925" hallmark of sterling silver and the official Russian "Kokoshnik" assay mark (tiny profile of a woman's head with a Russian head dress named "Kokoshnik") on the reverse of the rotating necklace bale. The large size of the Crucifix suggests that it has been worn as a pectoral Cross by an Orthodox priest or a deacon.

The Crucifix has visible vintage or antique appearance with signs of aging and wear consistent with long-time. Devotional use including reduced quality of artwork, deformations of the original shape, scratches and dents, and patches of discoloration or silver patina.

The size and weight of the Crucifix are shown on the photographs for this listing. The obverse bears the traditional Orthodox iconic image of the Crucifixion on the three-bar cross venerated as the True Savior's Cross in the Eastern Orthodox and some Eastern Catholic churches. Such a cross has three horizontal crossbeams: the top one represents the "INRI" nameplate inscribed on this Crucifix in Cyrillic letters as I. , and the bottom one, a footrest.

The footrest crossbeam is depicted pointing up, toward Heaven, on Christ's right hand side where the Penitent thief, St. The cruciform halo around Christ's Head is a symbol of the Uncreated Light Greek:??

, or grace of God shining forth through the icon. Each of the bars of the cross incorporated into Christ's halo is one of the Greek letters? Meaning "the Existing One", thereby indicating the Divinity of Jesus.

The left and right side ends of the pendant's horizontal crossbar just below Christ's hands display the Sacred Name of Jesus Christ inscribed as the "IC XC" Greek Christogram, the "IC" on the left, and the "XC" on the right. At the right hand of crucified Jesus, there is a depiction of His grieving Mother, the Most Blessed Virgin Mary. At the left hand of Jesus, there is an image of St.

John the Apostle, the Disciple to whom crucified Jesus said, "Behold, your mother" (John 19:27). Parallel to the vertical crossbar, there are images of the two Instruments of the Passion (Arms of Christ, Arma Christi), the Holy Lance (spear) of a Roman soldier, and the Holy Sponge attached to the end of a long stick or cane. They are subjects to adoration along with the Cross, and are often depicted on the Byzantine-style "Golgotha" pectoral crosses and crucifixes. An image of the skull, or Adam's head, buried in the cave below the Savior's Cross refers to Golgotha (Calvary), the elevated site where Jesus was crucified, which the Bible says means "the place of the skull" in Hebrew.

An ancient tradition of Catholic and Orthodox Churches held that it was also the burial place of Adam, thus symbolizing the ultimate victory of Christ over sin and death. The top part of the obverse bears the iconic. Image of the Holy Face of Jesus ("Not Made by Human Hands") in the centerpiece. This image is considered to be the oldest known Christian icon, and also the oldest known portrait of Jesus.

According to the Byzantine tradition, King Abgar of Edessa was a leper. He sent his servant to Galilee with a request to Jesus asking Him to come to Edessa and heal him. When Jesus learned about the Abgar's faithful request, He washed Himself with some water. Then, by wiping His face with a linen cloth, He made an imprint of His features, and sent the cloth back to Edessa. When Abgar beheld the cloth, his leprosy was cured.

In Greek, this icon is called "Achieropoietos", meaning "not made by human hands". In the Byzantine tradition, the image was sometimes called the Mandylion, meaning "small handkerchief".

In the Western Catholic tradition, the image is known as the image of the Holy Face of Jesus, as preserved on the Veil of Saint Veronica. Veronica is a Christian relic of a piece of cloth which bears a true image of the Holy Face of Jesus. The Western Catholic tradition says that Saint Veronica from Jerusalem met Jesus on his way to Calvary. When she wiped the blood and sweat of His Face with her veil, an image has been imprinted on the cloth. An inscription representing the traditional Orthodox prayer in Church Slavonic placed on the reverse of the pectoral crosses meaning "SAVE AND PROTECT". Please examine all photographs carefully and do your own research if necessary. Please note that photographs are an important part of the item's description. The measuring meter and electronic scale are not for sale, and might be photographed with the item in order to provide a size and weight reference. There are no guarantees with the listing because most items are original vintage or antique objects that are quite old. This item is in the category "Collectibles\Religion & Spirituality\Christianity\Crucifixes & Crosses". The seller is "godblessyou21" and is located in this country: US.