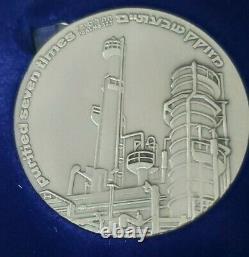 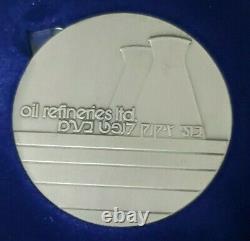 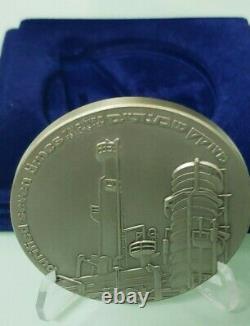 The foundations for the Haifa Refineries were laid by the Anglo-Iranian Oil Corporation in 1938. In 1959, ownership was transferred to the Israel Government and since then much has been done to increase production and improve product quality. The Haifa Refinery served as a base for establishing auxiliary industries. With the rise in fuel consumption, another refinery was built in Ashdod.

To mark the 40th year of the establishment of the Haifa Refinery, a special medal was issued. The reverse depicts two storage tanks behind a brick wall. The name Oil Refineries Ltd.

Appears in Hebrew and English. The refinery is shown on the reverse. The biblical quote on rim reads: "Purified Seven Times" (Psalms 12:7).

This item is in the category "Coins & Paper Money\Exonumia\Medals". The seller is "dravisk" and is located in this country: US. This item can be shipped to United States.